Derby Drama is a tabletop role-playing game about the drama and excitement of skating in a roller derby match. Each player takes on the character of a skater in the bout and acts out both athletic competition and interpersonal conflict.

Q: Do I have to know about role-playing to play?

A: Nope! Derby Drama is designed be easy to learn for both new and experienced role-players.

Q: Do I have to know about roller derby to play?

A: Nope! The book has plenty reference images and information to help new players easily fake some roller derby expertise.

Q: How many players can play?

A: Derby Drama works best with two evenly divided teams of 1-3 players on each team. It can also work with uneven numbers of players with a bit of effort.

Q: How long does the game take?

A: Just like real roller derby, Derby Drama is divided up into phases called “jams”. It takes two to four hours to play if you play three jams in each half of the game. To shorten a game, just play fewer jams!

A: Yeah! and no! Like D&D, you and your friends take on fictional personas and tell a story together. Like D&D, you roll dice to decide what happens. Like D&D, it’s super fun!

But in other ways this game is really different. For one, Derby Drama doesn’t have a “Dungeon Master” (a single player who is responsible for the setting, enemies, and non-player characters). Instead, the players are all equally responsible for telling the story. Derby Drama is much simpler, and it’s intended for one-shots instead of a long series of connected games. And Derby Drama uses only common six-sided dice, instead of D&D’s several differently-sized dice.

If you like D&D, you may (or may not!) like Derby Drama! If you hate D&D, still consider giving Derby Drama a try.

I was inspired by several games while making this, including:

…buuuuut I don’t think Derby Drama is much like any of them! I hope that it’s like all the emotions of a derby bout squished into a book and character sheets and some dice!

Q: Okay, but seriously, how do you play?

The full ruleset isn’t ready yet, but here’s a summary:

Each player choses to play a Jammer or a Blocker. They create a derby name and look for their character, as well as assigning numbers to four stats: AGILITY, POWER, DRAMA, and HEART.

Just like a real roller derby bout, Derby Drama is broken up into two periods, each having multiple jams.

When all the players have played out their strategies, the Team Dice totals are added to the Scoreboard. The team with the highest score at the end of the bout will win the game-within-the-game.

Between jams and at halftime, players can role-play how they are feeling about the bout, their teammates, and their rivals. They can try to gain advantage for their own team by Boosting Morale (with HEART), or disadvantage the opposing team by Stirring Up DRAMA. Friendship, romance, revenge, and straight-up cheating are all on the table. However - schemes can backfire. If your team has Too Much Drama, everything spirals out of control, and who knows what could happen?

Hopefully this summary gets you excited to see the full rules and try out the game!

Q: Who drew the beautiful art?

The illustration of skaters on this page is by the very talented Kaylee Rowena!

Are you ready to roll?

If you’d like to playtest or chat about Derby Drama, consider joining the Discord Server. We play a game about every other week. You’re also welcome to email me if you’d like to run a playtest offline, as long as you don’t mind giving plenty of feedback on how it goes!

I plan to fund Derby Drama during ZineQuest 2 in February 2020. The game will be released as a set of three zines: a rule and facilitation guide, an illustrated guide to roller derby moves and a short premade setting (a small-town co-ed roller derby league). I’ll also release PDFs and a spreadsheet for online play and printable character sheets for offline play. 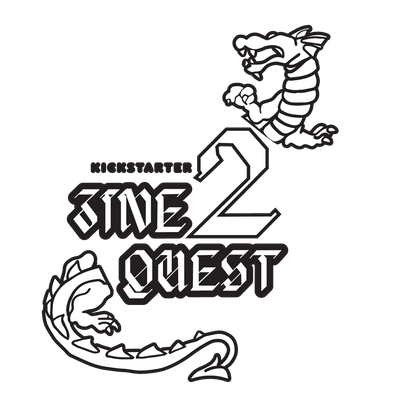